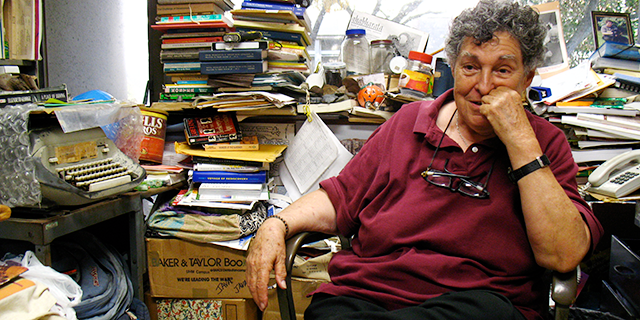 Emeritus Professor of Anthropology Alice Greeley Dewey was born to Sabino L. Dewey and Edith E. Greeley in 1928. She passed away from a stroke on June 11, 2017 at Manoa Cottage Kaimuki in Honolulu. She is survived by her niece, Rhonda Dewey, of Tucson Arizona, and two grandnieces, Dr. Jamie Natkowski and Brandi Goode. Dewey was the granddaughter of American philosopher John Dewey and was named after her grandmother Alice. Alice’s father, Sabino, was born in Italy and adopted as a child by the Deweys on a trip to Venice. Alice grew up on Long Island, New York and had a great love for animals, especially large dogs such as Newfoundlands. She and her brother Thornton, who preceded her in death, grew up surrounded by such creatures. Inspired by her grandfather’s trips abroad to places such as China, Alice obtained her degrees, including a PhD in anthropology in 1959 from Radcliffe College, at that time the all-female counterpart, now fully integrated, of Harvard University. As a graduate student, she was asked by Harvard professor Douglas L. Oliver to join a multidisciplinary research team sponsored by Harvard and MIT to study the economy, religion, and culture in Pare, East Java, Indonesia. This was known as the Mojdokuto project and in addition to Dewey, it included Clifford Geertz, Hildred Geertz, Robert Jay, Donald Fagg, and Edward Ryan. The work of this team (1953-1954) stands as the pioneering anthropological research on Java by Americans. Alice G. Dewey’s contribution was a monograph titled, Peasant Marketing in Java, that was widely recognized as a major contribution to economic anthropology and the study of Java. Dewey joined the Department of Anthropology at the University of Hawaiʻi in 1962 where she worked until partial retirement in 2005 and full retirement in 2007. She also spent time at the London School of Economics where she became close friends with Rosemary and Raymond Firth. Sir Raymond Firth, a student of Bronislaw Malinowski, is well known for his anthropological studies among Pacific island people such as the Tikopia. Dewey had great admiration and fondness for the Firths. They corresponded until his last years when she traveled to London to say her goodbye in person.

Alice G. Dewey was the graduate advisor for S. Ann Dunham-Soetoro. When Dunham died prematurely in 1995, she left a dissertation filed in 1992 that Dewey subsequently co-edited as a book and published as Surviving against the Odds: Village Industry in Indonesia by Duke University Press in 2009. When Dunham’s son from her first marriage, Barack Obama, entered the 2008 American presidential race, there was a flurry of attention focused on every aspect of his life, including that of his mother, Dewey’s advisee. Dewey gave interviews to numerous newspapers, radio programs, magazines, and appeared on a number of TV broadcasts including CNN’s Anderson Cooper 360 ̊ show. She joked about her “second career” as a spokesperson for Dunham and was a key respondent for her biography, A Singular Woman, by Janny Scott (Riverhead Books). One could say that Alice was something of a media darling for several years and camera crews were occasionally seen peering inside her office teaming with stacks of dissertations, books, journals, and assorted piles of papers. She seemed to revel in her favorite student’s success as both an anthropologist and a mother. Throughout the decades, Dewey kept in touch with her Javanese “family”, the Norobanguns, and made a return trip to Pare to visit friends there.

On any given Saturday afternoon, Alice Dewey could be found on the UH campus observing a rehearsal of Javanese gamelan music. She was undoubtedly the performing group’s biggest fan and would be seen at concerts rain or shine, center front in the outdoor amphitheater. If a downpour occurred she would remain in place in a rain poncho, when all others in the audience had left or moved under cover. It is fitting that the name of the set of instruments, Kyai Gandrung (Venerable One in Love), so aptly describes Dewey’s great love for Java, Javanese people, and Javanese performing arts.

There is no question that Alice G. Dewey led an interesting and eventful life filled with intellectual vibrancy, travel, and life abroad, and was most known for her kindness and generosity by her students. Without children of her own, she showered her maternal affections on graduate students and took on the role of mentor and advisor to many by chairing or serving on their graduate committees at the expense of writing books and furthering her own name in academia. She leaves a grateful mass of former students, many of whom kept in touch with her over the years and now hold important positions in governments, businesses, and universities all over the world.

No true story is perfect and it was in late 2013, weeks after Alice’s 85th birthday party was held in her home, that misfortune befell this accomplished and big hearted anthropologist. Along with two other women living in her household, she felt compelled to move from her beloved home (and dog) in Manoa Valley in Honolulu. She had lived there for over 40 years and from the beginning had made the house a refuge for graduate students and even colleagues in need of a place to stay. When they left to do fieldwork, she stored their belongings, often in the living room, and looked after their dogs and cats. The Dewey household, especially in the early days, was a house filled with students, dogs, cats and other assorted critters, intellectual discussion, humanitarian spirit, and one big hearted professor. She never charged anyone rent. To one side of the front door which was never locked, and seldom even shut except for a screen door, was a plaque that read, “Alice’s Home for Aged Graduate Students.” After moving from her house and becoming embroiled in years of legal battles over her care and her house, she never saw this beloved home again.

In some cases, Alice literally saved people from dire circumstances. On her way to Indonesia in 1975 she stopped to visit an archaeological dig in Thailand in 1975. U.H. Anthropology student, Jean Kennedy, was working there, as was a young South Vietnamese student who literally had no place to go due to the ending of the Vietnam War. Dewey heard of his plight and when cleaning artifacts next to him she casually suggested that he come to Hawaiʻi and stay at her house. He was dumbfounded by this offer to a complete stranger but gratefully accepted her sponsorship of him for a refugee visa. On Thanksgiving day professor Dewey picked up Khoach Nguyen at the Honolulu Airport and welcomed him into her home. He learned that day the true meaning of thanksgiving and has celebrated its special meaning to him every year. He eventually became a U.S. citizen and found a job working at the Library of Congress in Washington D.C. Since leaving Dewey’s household, Nguyen faithfully called her on a monthly basis and then weekly after she left the house and her health declined. Nguyen and his wife traveled to Hawaiʻi on two separate occasions to help Dewey cope with her final years in “exile” from her Manoa home, one of these trips after she entered the nursing facility. This is only one selected case of the many instances when professor Dewey gave hope and help beyond the call of duty. Although there were some who took advantage of her generous spirit, there are far more who remain the grateful ones. Alice Greeley Dewey was truly a great soul who deeply touched numerous lives of deserving and undeserving human beings alike on this earth. In Javanese myth there is a heavenly gamelan orchestra called Lokananta on which the gods play. Perhaps she will now sit front and center for performances featuring the great gongs of Lokananta.

Written by Nancy I. Cooper, one of the grateful ones.

A celebration of life will be held at a much later date and will be publicized at that time. Condolences may be sent to: Rhonda Dewey, 5151 W. Lambert Lane, Tucson, AZ 85742 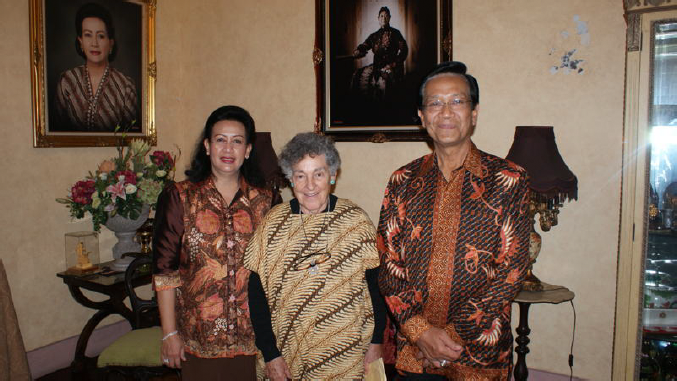 Alice Dewey with the Sultan of Yogyakarta and his wife