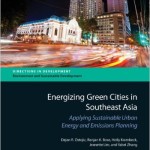 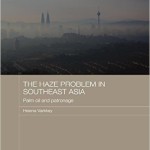 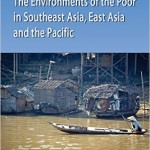 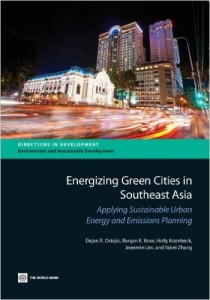 Cities currently account for about two-thirds of the world’s annual energy consumption and about 70 percent of greenhouse gas (GHG) emissions. In the coming decades, urbanization and income growth in developing countries are expected to push cities’ energy consumption and GHG emissions shares even higher, particularly where the majority of people remain underserved by basic infrastructure services and where city authorities are underresourced to shift current trajectories. These challenges are faced by many cities and millions of people in the East Asia and Pacific (EAP) Region, which is experiencing unprecedented rates of urbanization, as the region’s urban population grows almost twice as fast as the world’s urban population. Energizing Green Cities in Southeast Asia lays out a blueprint for transforming EAP cities to global engines of green growth by choosing energy efficient solutions to their infrastructure needs. It urges national and municipal governments to reform institutions, build capacity, and strengthen energy planning and governance in order to mainstream energy efficiency on a citywide scale and introduce low-carbon policies in fast-growing cities in the EAP Region which will define the Region’s energy future and its GHG footprint. This book is based on case studies undertaken in three pilot cities — Cebu City (the Philippines), Da Nang (Vietnam), and Surabaya (Indonesia) — which illustrate the use of an energy efficiency platform — SUEEP (sustainable urban energy and emissions planning) — for the identification and prioritization of green investments across all major infrastructure sectors. It presents the SUEEP process as a framework for collaboration between municipal governments, stakeholders, private investors and financing institutions in achieving the green growth objectives at the city level. It also provides step-by-step guidance on the SUEEP framework in the form of a Guidebook to help a city develop its own energy and emissions plan and link its aspirations to actionable initiatives to improve energy efficiency and reduce emissions.

Despite the efforts of Southeast Asian governments and of ASEAN, transboundary haze continues to be a major environmental problem in Southeast Asia. This book demonstrates that the issue is complex, and explains why efforts to solve the problem in purely political terms are ineffective, and likely to continue to be ineffective. The book shows how state-led, state-incentivised agribusiness development lies at the heart of the problem, leading to a large rise in palm oil production, with extensive clearing of forests, leading to deliberate or accidental fires and the resulting haze. Moreover, although the forest clearing is occurring in Indonesia, many of the companies involved are Malaysian and Singaporean; and, further, many of these companies have close relationships with the politicians and officials responsible for addressing the problem and who thereby have a conflict of interest. The author concludes by discussing the huge difficulties involved in overturning this system of ‘patronage politics’. 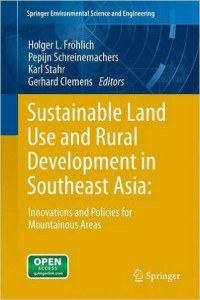 This book is based on the findings of a long-term (2000-2014) interdisciplinary research project of the University of Hohenheim in collaboration with several universities in Thailand and Vietnam. Titled Sustainable Land Use and Rural Development in Mountainous Areas in Southeast Asia, or the Uplands Program, the project aims to contribute through agricultural research to the conservation of natural resources and the improvement of living conditions of the rural population in the mountainous regions of Southeast Asia. Having three objectives the book first aims to give an interdisciplinary account of the drivers, consequences and challenges of ongoing changes in mountainous areas of Southeast Asia. Second, the book describes how innovation processes can contribute to addressing these challenges and third, how knowledge creation to support change in policies and institutions can assist in sustainably develop mountain areas and people’s livelihoods.

The Environments of the Poor in Southeast Asia, East Asia and the Pacific
Aris Ananta (Editor), Armin Bauer (Editor), and Myo Thant (Editor) 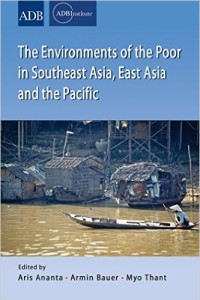 This book provides examples of possible triple-win solutions for simultaneously reducing poverty, raising the quality of the environment, and adapting to climate change. The book provides empirical evidence and observations from sixteen case studies in Southeast and East Asia, and from the Pacific. It argues that a spatial approach focussing on the environments in which the poor and vulnerable live, would trigger changes for development policies and implementation that better balance environmental and social concerns. In line with the post-2015 Millennium Development Goals (MDG) and Sustainable Development Goals (SDG) agenda, emphasizing integrated development approaches for the slum poor, the upland poor, the dryland poor, the coastal poor, and the flood-affected wetland poor, would also bring the environment and poverty agenda closer. The book emerged from a cooperation of the Asian Development Bank (ADB) with the Institute of Southeast Asian Studies (ISEAS) in partnership with experts from research institutes and think-tanks in the Asian region.