On Food and Society in Viet Nam 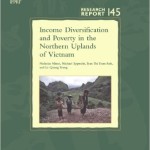 Rice Talks explores the importance of cooking and eating in the everyday social life of Hoi An, a properous market town in central Vietnam known for its exceptionally elaborate and sophisticated local cuisine. In a vivid and highly personal account, Nir Avieli takes the reader from the private setting of the extended family meal into the public realm of the festive, extraordinary, and unique. He shows how foodways relate to class relations, gender roles, religious practices, cosmology, ethnicity, and even local and national politics. This evocative study departs from conventional anthropological research on food by stressing the rich meanings, generative capacities, and potential subversion embedded in foodways and eating.

There were only three tiny vegetarian restaurants (com chay) in the small town of Hoi An in Central Vietnam in year 2000. Ten years later, the town boasted more than twelve vegetarian restaurants, most of which had opened since 2007. In this chapter, I explore the various meanings attributed by the Hoianese to the recent popularity of vegetarian food in town. My Hoianese interviewees gave a range of reflections on the consumption of vegetarian food. Some argued that the ease of control over religious activities in Vietnam had resulted in a big comeback for Buddhism in Hoi An and for an increased demand for vegetarian food. Others suggested that the recent economic prosperity was accompanied by a sharp rise in nutritionally related diseases, which a vegetarian diet was believed to counteract. Younger interviewees commented on the complex and stressful nature of modern life and suggested that Buddhism and vegetarianism were potential solutions. Yet another claim was that prosperity and overindulgence had led many people to vegetarianism, for some as a moral remedy and for others as just another mode of conspicuous consumption. Altogether, vegetarianism was depicted by my Hoianese interviewees as both an outcome of and a reaction to modernity. 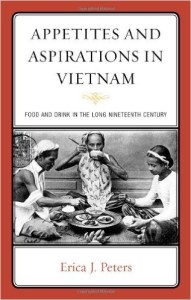 In Vietnam during the long nineteenth century from the Tây Son rebellion to the 1920s, individuals negotiated changing interpretations of their culinary choices by their families, neighbors, and governments. What people ate reflected not just who they were, but also who they wanted to be. Appetites and Aspirations in Vietnam starts with the spread of Vietnamese imperial control from south to north, marking the earliest efforts to create a common Vietnamese culture, as well as resistance to that cultural and culinary imperialism. Once the French conquered the country, new opportunities for culinary experimentation became possible, although such experiences were embraced more by the colonized than the colonizers. This book discusses how colonialism changed the taste of Vietnamese fish sauce and rice liquor and shows that state intervention made those products into tangible icons of a unified Vietnamese cuisine, under attack by the French. Vietnamese villagers began to see the power they could bring to bear on the state by mobilizing around such controversies in everyday life. The rising new urban classes at the turn of the twentieth century also discovered new perspectives on food and drink, delighting in unfamiliar snacks or giving elaborate multicultural banquets as a form of conspicuous consumption. New tastes prompted people to reconsider their preferences and their position in the changing modern world. For students of Vietnamese history, food here provides a lens into how people of different class and ethnic backgrounds struggled to adapt first to Vietnamese and then French imperialism. Food historians will find a provocative case study arguing that food does not simply reveal identity but can also help scholars analyze people’s changing ambitions.
More Information 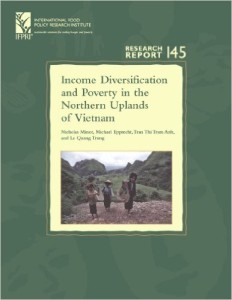 Vietnam has experienced macroeconomic stability and high rates of economic growth since the mid-1990s; nevertheless, it remains one of the 30 poorest countries in the world. Within Vietnam, the Northern Uplands is the poorest region, as well as being the most dependent on agriculture. This report examines income diversification in the Northern Uplands, including its contribution to poverty reduction and the constraints currently limiting further diversification. Given that crop and income diversification have been identified as essential components in raising rural incomes and reducing rural poverty, this report has significant implications for those involved in formulating agricultural policy and devising development programs.