Why a Monkey? Meaning and Monkey Business

Why a Monkey? Meaning and Monkey Business

Monkeys are featured characters in South, Southeast, and Northeast Asian traditional stories performed by Hindu, Islamic and Buddhist performers, providing metaphors of right and wrong ways of living. Why is the monkey a favored character and why does this animal in traditional stories often accomplish what humans and divinities can’t? How did Subali and Sugiwa (tonight’s heroes) first turn into monkeys and attain the superpowers that allow them to defeat demons and enter heaven? Perhaps monkey business something that men and women should heed. 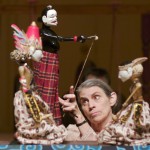 Kathy Foley is a graduate of University of Hawai’i Asian Theatre Ph.D. Program and was a East-West Center grantee. She is a Professor of Theatre at the University of California, Santa Cruz.  Her research in Southeast Asia has been supported by Fulbright, Soros Foundation, and Asian Cultural Council. She  editor of Asian Theatre Journal and writes frequently on puppetry and mask. She has curated exhibitions for National Geographic Society, Yale University, and the Center for Puppetry Art. She will open an exhibit  on Malaysian Puppetry, Dance, and Islam at the  East-West Center Gallery in early Feb. and perform Wayang Golek rod puppetry telling of the animistic Goddess of the South Sea, the heroes of the Hindu Mahabharata, and the Islamic Saints of Java meet and invent puppetry to heal the world.