Updates on ‘Our Land is the Sea’ Documentary

Tags: Our Land is the Sea

Our Land is the Sea, a collaboration between the Center for Religious and Cross-cultural Studies (CRCS), Gadjah Mada University and CSEAS, is nearing official release. 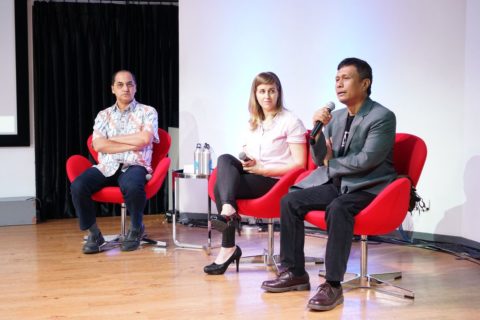 The documentary was screened on Wednesday, 8 August 2018, at the U.S. embassy’s @america studio, Pacific Place Mall, Jakarta, as part of their Road to Our Ocean Conference 2018. A panel discussion was hosted by Dr. Kelli Swazey and Dr. Zainal Abidin Bagir of the Center for Religious and Cross-cultural Studies, Gadjah Mada University.

The film will have its premiere festival screening at the Bali International Film Festival, which runs from September 24-30, 2018. Our Land is the Sea will be uploaded on the CSEAS website beginning in early October. Stay tuned for further updates.

Our Land is the Sea/Air Tanahku is a 25-minute documentary about three generations of a Bajau family in Wakatobi National Park, Indonesia, who are navigating drastic cultural and environmental change. In preparation for a ceremony that marks their son’s entrance to adulthood, this Bajau family grapples with how coral reef extinction, economic change, ethnic discrimination, and changing practices of Islam will mean a different life for their children and their people in the future.

Video journalist and creator of the Global Workshop, Matt Colaciello, and CRCS faculty member and University of Hawaiʻi alum Dr. Kelli Swazey (Anthropology) worked together with the Bajau village of Sampela to document how the community’s Islamic identity and their indigenous religious practices informs their relationship with the ocean environment of their home in the Tukang Besi archipelago.

Our Land is the Sea is one of two films that will be produced under the Voicing Diversity Project, which aims to explore themes of religious diversity in Indonesia.