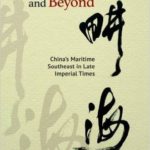 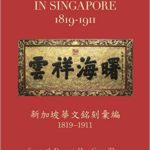 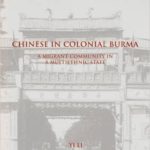 Chinese in Colonial Burma: A Migrant Community in A Multiethnic State
Yi Li 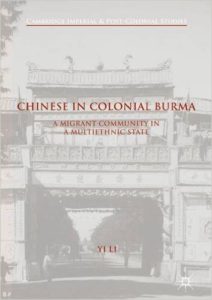 Using previously unexplored archives from colonial institutions and individuals, and primary materials produced by the Burmese Chinese, this comprehensive study investigates over a century of history of the Burmese Chinese under British colonial rule. Due to the peculiar position of Burma in the British imperial world and the Southeast Asian Chinese network, the Chinese community had a unique experience in a Southeast Asian colony governed by Europeans with an India-based system. This book reveals, through everyday life experience, prominent community figures, and milestone events, the internal rivalry and integration among different regional groups within the community, and the general impressions it left in contemporary observations and communal memories. The book also traces historical roots of some unsolved ethnic issues in present-day Myanmar.

The history of Singapore’s Chinese community is carved in stone and wood: in the epigraphic record of 62 Chinese temples, native place associations, clan and guild halls, from 1819 to 1911. These materials include temple plaques, couplets, stone inscriptions, stone and bronze censers, and other inscribed objects found in these institutions. They prove first-hand historical information on the aspirations and contributions of the early generation of Chinese settlers in Singapore. Early inscriptions reveal the centrality of these institutions to Chinese life in Singapore, while later inscriptions show the many ways that these institutions have evolved over the years. Many have become deeply engaged in social welfare projects, while others have also become centers of transnational networks. These materials, available in Chinese and in English translation, open a window into the world of Chinese communities in Singapore. These cultural artifacts can also be appreciated for their exceptional artistic value. They are a central part of the heritage of Singapore
More Information 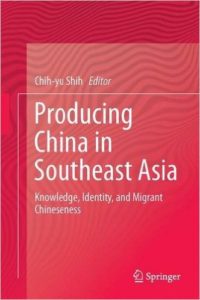 This book presents studies on Chinese intellectuals in Southeast Asia and how they understand China and Chineseness in the 21st century. It posits, through analyses of works and oral histories of a number of Chinese scholars in the region, that the dominant but distinctive approaches adopted by them are those that are rooted in humanism and pragmatism. In doing so, the book explores the significant population, local conditions and strategy of survival among the Southeast Asian Chinese as factors that influence their views and perspectives. Studies presented in the book simultaneously implicate subjectivity, where authors and their readers position themselves among ethnic, national, and civilizational identities. It highlights that while national-level identity necessarily involves dangerous self-interrogation and, at times, politics that is often suppressive and confrontational, intellectual writings on China that stick to the ethnic and civilizational levels provide more sensible exits. With that, the book then goes on to make the argument that in Southeast Asian Chinese studies, the humanities usually prevail over the social sciences at these two alternative levels. Lastly, the book also shows how the humanities can be instrumental to Southeast Asian Chinese scholars’ choice of identity strategy which makes pragmatism an important theme. The book will be of interest to students and researchers involved in Southeast Asian and Chinese studies.
More Information
Boundaries and Beyond: China’s Maritime Southeast in Late Imperial Times
Ng Chin-keong 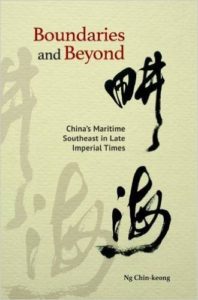 Using the concept of boundaries, both physical and cultural, to explain the development of China’s maritime southeast and its interactions across maritime East Asia and the broader Asian Seas, this book offers a new way of understanding Chinese history in the late Imperial period. Ng Chin-keong examines social boundaries between “us” and “them;” challenges to rigid demarcations posed by the state; movements of people, goods, and ideas across borders and among cultures; and the line between tradition and innovation. The result is a novel way of understanding China’s relations with neighboring territories and people as well as the nature of tradition in China and its persistence in the face of changing circumstances.
More Information